Not to be confused with Mythic Titans.

Titans are bosses that may only be fought if you are in an alliance.  There are titans to match each element at each star level.

Titan battles are against one big boss.  The two outer tiles miss the titan, while the middle five hit.  If the titan is a rare titan (Ancient Tiger, Thunder Unicorne, Dragon Rooster, Alpha Gryphon or Queen Harpy), then the element of the titan will be reflected back to the any heroes of that element.

There is a far more in depth discussion about specific heroes to use for each particular color of titan over on Reddit. It's well worth the read if you're interested!

They range in difficulty from 1* up through 14*.  Since defeating a titan awards additional Titan Score, the level of the titan that is spawned fluctuates between levels, increasing until failure, then decreasing anew until your Titan Score is increased enough to attempt the more difficult one again. Rare titans appear approximately every 8-10 killed titans and rotate through the possible elements (source).  They bring with them an increased chance for a specific ascension drop, though they are also more difficult as they will reflect their own element back at the attackers, have additional health, and do additional damage.

* 3.3% is close to the average damage required from members of a 30 strong alliance.

The titan wanted chest is filled when five titans (on which a player has inflicted any level of damage) have died. Loot from titan wanted chests are often far from exceptional.  It provides an 11% chance for a 4* ascension material and 24% chance of an Epic Troop Token.  (Source)

That said, since it requires killing 5 titans, it's basically a once-a-week reward for alliance based players (inclusive of titan escapes) and, potentially, a twice per five days reward reward for mercs. When players, including those acting as mercenaries, leave an alliance, the players' titan wanted chests gets greyed out. These chests are given a 12 hour chest timer that differs from the timers of other chests in that remaining time cannot be skipped by the use of gems. A player's titan energy will begin recharging from the instant that the player's titan energy is reduced from 3 to 2. The player may then wait within an alliance to witness the titan's death and then, after leaving, there will be a further 12 hours of energy recharge time before the player can again add filling to their titan wanted chest.

If a titan wanted chest is replaced by an elemental wanted chest, even if the elemental chest is filled more quickly, a merc player may do well to wait for the end of a 4 hour titan energy recharge cycle (or be prepared to use a titan energy flask) before mercing again. Wanted chest credit for a titan kill will only be given after a player has damaged a titan. 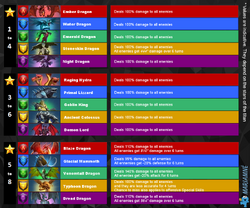 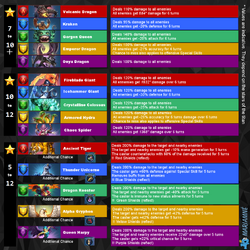 This section is a stub. Please help the Empires and Puzzles Wiki by expanding it, adding pictures, and improving existing text.
Community content is available under CC-BY-SA unless otherwise noted.
Advertisement