Most of the status effects can stack with each other, but some may overwrite the current status (most notably opposite status like increased attack and decreased attack). DaveCozy has made a list of which status can or can't be overwritten. Click here to check it out.

Beneficial modifiers applied by Buffers to allies. Can be dispelled by Dispellers, unless they are marked as Undispellable. You can check below which heroes and items can apply them.

Harmful modifiers applied by Debuffers and damage over time. Typically applied to enemies, but in some cases it can be applied to the caster itself. Can be dispelled by Cleansers and Antidotes, unless they are marked as Undispellable. You can check below which heroes and items can apply them.

This category of buffs are always active once their conditions are met and are not applied by heroes. They are available during some special rules of Wars and Raid Tournaments. 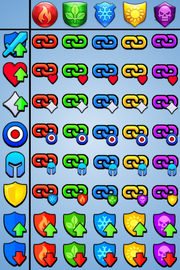 Retrieved from "https://empiresandpuzzles.fandom.com/wiki/Status_Effects?oldid=8744"
Community content is available under CC-BY-SA unless otherwise noted.